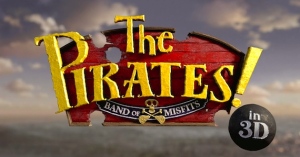 While this looks like a cute animated feature for kids, the language and style of humor was for a much older audience. Most of the  references and jokes will go way over their heads, but the adults will get a good laugh. Yes, they’ll sit there entertained anyway, but they won’t get much out of it. The 3D doesn’t add too much, either. Only on rare occasions do I shell out the extra for it, and this is not one of them. 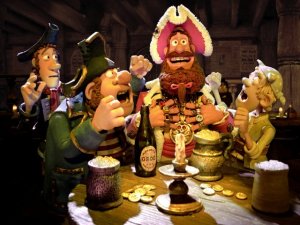 That being said, the movie is colorful, with cool characters and costumes. The monkey is funny. 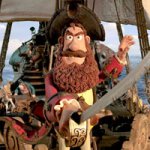 Hugh Grant is surprisingly very good as the pirate captain named Pirate Captain. His voice is expressive, and the accent adds to the character. 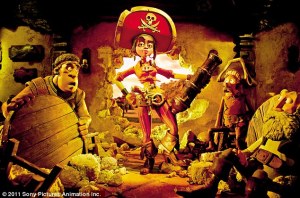 She’s a pretty sexy character, what with her stomach showing, she has a very curvaceous figure and all the male pirates drool over her. If you’re not into cartoons with a sexuality, you’re not going to like her very much. 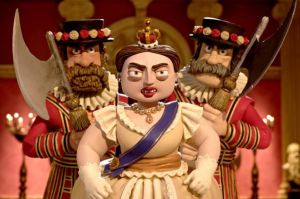 Here’s the storyline: “Pirate Captain sets out on a mission to defeat his rivals Black Bellamy and Cutlass Liz for the Pirate of the year Award. The quest takes Captain and his crew from the shores of Blood Island to the foggy streets of Victorian London.”

“After years of humiliation and failed attempts to win the coveted Pirate of the Year Award, Pirate Captain and his oddball crew take on the cream of the pirating crop – Black Bellamy, Peg Leg Hastings and Cutlass Liz – in a race to pillage the most booty. They soon cross paths with lovelorn scientist Charles Darwin, who persuades the Captain that the crew’s prized ‘parrot’, Polly, could be the answer to the ‘untold riches’ they are searching for. Their adventure takes them to Victorian London where they meet Darwin’s sidekick ‘man-panzee’ Mister Bobo, and the notorious pirate-hating Queen Victoria herself. It soon unfolds that Darwin’s motives for helping the crew are not what they seem, and the Queen has an evil hidden agenda of her own. The Pirate Captain must choose between basking in the glory of being crowned Pirate of the Year, or staying faithful to his trusted crew.” – written by Tom on IMDB.

The Pirates! Band of Misfits is in theatres April 27, 2012. It is 1 hour and 28 minutes long. It is rated PG for mild action, rude humor and some language.

So what did I think?

I’d pass on this one. Or if your kids insist, I’d skip the 3D or wait to rent it later.