Let’s Review: WON’T BACK DOWN

Posted on September 5, 2012 by lilmissmovie

Technically its genre is “drama” but it’s really not too dramatic. It’s very real, from Maggie Gyllenhaal’s quirky and slightly manic character, to Viola Davis’ seriousness. After The Help, I was convinced of Davis’ power, and here I believe it again.  The movie is by no means a comedy, but it’s a natural funny because you can relate to the characters.

Nothing can stop a mom on a mission, as both characters show. Adams Elementary, a failing inner city school, needs change and they are the ones to instigate it. Maggie Gyllenhaal plays an uneducated single mom working two jobs to make ends meet while she has no choice but to send her daughter to

an F-grade inner city school with totally checked-out teachers who won’t help her dyslexic daughter, Emily Alyn Lind (This 10-year-old has a very impressive resume on imdb.com), to learn to read. Viola Davis is a teacher at that school who lost her passion for teaching, and whose son (Dante Brown) also has difficulties with school.

The film shows the struggle of the parents, the teachers, the administration, the teacher’s union and all the bureaucracy within the education system to save a school. I don’t really know what else to write about it, except that it was predictable, yes, but a very good 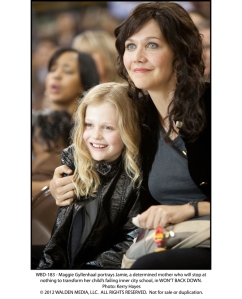 story nonetheless. It’s a PG rating, so it’s fine for kids, but they might get a little bored before it’s over. Educational reform isn’t exactly a riveting topic for a six-year-old. I would absolutely rather see this movie than, say,  The Possession. It tugs a bit at the heartstrings, it’s relatable,  it’s an important topic, and it’s about love and perseverance. You’ll leave the theatre feeling better.

1 Response to Let’s Review: WON’T BACK DOWN