Are you expecting just one big chase scene in which Joseph Gordon-Levitt is forced to “ride like hell” on his bicycle around New York, shouting aloud “what is in this package?!” Because that’s what you’ll get.I was exhausted after watching this film, and it made me never want to get on a bike ever again.

This movie was predictable, but had a few funny moments in there. If you think people on bikes getting pounded by cars is funny, you’ll get a few more chuckles than others (I chuckled quite a bit).

The funniest part is played by Christopher Place as an NYPD bike cop, by far. Without him, the movie would be a bit too dull. 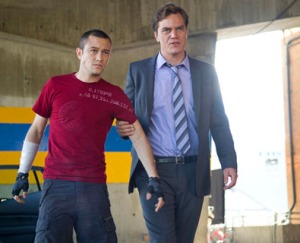 The bad guy, Michael Shannon as corrupt detective/cop Bobby Monday. With a last name like that, it’s no wonder that everyone will end up hating him. He plays being despicable very well.

JGL is an ex-law student turned bike courier. He loves to ride. He’s his usual cute self. Different from his cop role in Dark Knight Rises? Not really. Separate from Arthur in Inception? Not exactly. Will he be unlike himself with Bruce Willis in the upcoming “Looper”? I highly doubt it. But do I resent it?

If you’re looking for a really funny movie this weekend, or a super thrilling mystery, or a scary horror, or a  feel-good heartwarmer- this isn’t the movie. I’m not even sure how to categorize it. It was “a chase movie,” and that’s pretty much it.

PREMIUM RUSH is in theatres Aug. 24, 2012. It’s rated PG-13 for some violence, intense action sequences and language. It is one hour and thirty-one minutes long.

Is it worth $12.50? Only if you REALLY want to see people on bikes for an hour and a half. Don’t forget your helmet.