As far as films about dysfunctional families go, no name is safe, as the Claus’ prove to have their own filial issues. But don’t let that scare you, because it is a very kid-friendly animated feature. 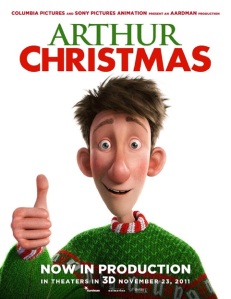 You might be thinking “this is a money-making excuse for a holiday movie” (at least, that’s what I thought).

BUT, the dialogue is actually pretty good, the animation is very well done, the characters well-cast (like James McAvoy and Hugh Laurie) , the 3D is done well, and the music is fantastic.

You’ll be cheering for the under dog and caroling under your breath, when you’re not drinking the smuggled-in eggnog I highly suggest you sneak in to the theatre.

Santa, Margaret, Steve and Arthur Claus, along with the curmudgeonly Grand Santa run the North Pole operation in a high-tech, highly-efficient manner, with little room for errors.

Santa actually doesn’t do much, but rather has the strongest and oldest of his sons, Steve, run everything from management of the elves, to dropping off the presents, to bringing Santa home in his “S 1” super starship Santa sleigh.

While in charge,  Steve forgets what’s important about Christmastime and instead focuses on efficacy, not emotion, while quirky/awkward Arthur is the only one with a true Christmas spirit.

But just a word of warning, you’ll have see this before the movie starts.

"Santa Claus is Comin' to Town"

Dust off your favorite festive sweater and bring the whole family out for a little holiday fun! This movie is a great way to start off the holiday season, for all ages 1-136.

Do you plan on seeing it? If yes, say why. If not, how can you not love Christmas?!

ARTHUR CHRISTMAS is in theaters on November 23.