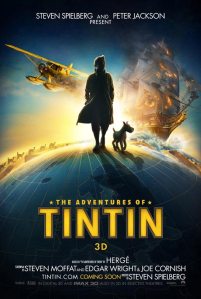 It appears to be a kid-friendly movie about a boy and his dog. However, you might want to re-think bringing the littler kiddies.

For being rated PG, the animated film has an alcoholic sea captain who constantly drinks whiskey, lots of guns, shooting and swords and a villain who will stop at nothing to discover the secret of the Lost Unicorn.

However, vices and violence aside, I give the movie a B+. I didn’t give it an A just because it is a little misleading in its “kids PG” appearance .

With a cast  like Daniel Craig, Andy Serkis and  Jamie Bell, and a crew with Steven Spielberg, John Williams and Peter Jackson, the movie is sure to generate viewers on the  nomenclature alone.  But, it certainly lives up to the hype.

The intro sequence draws you in from the get-go. The animation is absolutely incredible, throughout the entire movie, hands down. The characters are well-cast, the plot is solid and the soundtrack is phenomenal.

The Adventures of TINTIN comes out in theatres December 21.

You should go see it. But leave the smaller children at home.

Do you want to watch this movie? Have you seen it already? Tell me- what do you think?